Between 1914-1923, the Ottoman Empire (today Turkey) under two successive regimes, carried out a systematic and violent campaign of extermination against its native Greek citizens.

A general overview of the Greek Genocide.

A collection of eye-witness testimonies. 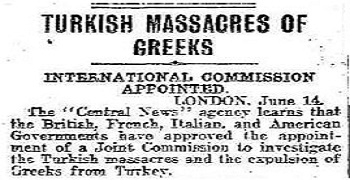 Newspaper reporting of the Greek Genocide. 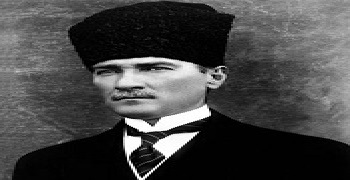 The perpetrators of the Greek Genocide.

Smyrna 1922: The Destruction of a City

In September, 1922, Mustapha Kemal Ataturk, the victorious revolutionary ruler of Turkey, led his troops into Smyrna (now Izmir) a predominantly Christian city, as a flotilla of 27 Allied warships-- including three American destroyers-- looked on. The Turks soon proceeded to indulge in an orgy of pillage, rape and slaughter that the Western powers anxious to protect their oil and trade interests in Turkey, condoned by their silence and refusal to intervene. Turkish forces then set fire to the legendary city and totally destroyed it. There followed a massive cover-up by tacit agreement of the Western Allies who had defeated Turkey and Germany during World War I. By 1923 Smyrna's demise was all but expunged from historical memory.

In the hinterlands of the Smyrna district it was the Greeks who bore the brunt of the Turkish policy. In June 1915 a violent campaign against the Greeks burst into the Turkish press, while posters exhorting the Moslems to murder appeared suddenly on the walls of schools and mosques. Murders of from ten to twenty peasants each day culminated in a massacre of the Greeks at Phocia, and the deportation of several hundred thousand others, and the destruction of their homes and carefully tended vineyards in the region north of Smyrna."- p46