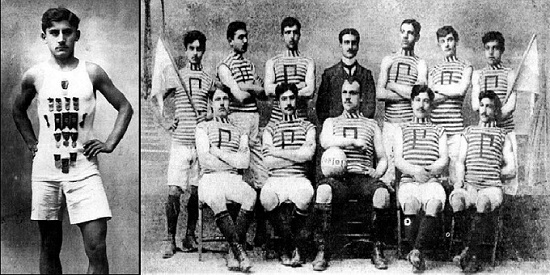 Simeon Ananiades (1902-1921) was born in Samsun in 1902 and was a student of Anatolia College at Merzifon in Ottoman Turkey, a college founded by Americans in 1887. After passing the entrance exam, he was admitted to the third year preparatory class of the college. He had an interest in English and literature and excelled in math and biology and often talked of becoming a physician. Overall he was an A-plus student in all his subjects, a young man who was intelligent, handsome, eloquent, kind and co-operative. One of his goals in life was to break the World record in the 100 yard sprint. He was also a very loyal Ottoman subject.

Apart from its athletic clubs, Anatolia College also had literary societies, one of which was the Pontus Club. It met every Saturday night and many of the Greek students at Anatolia were members. On February 12, 1921, Kemalist general Jemil Jahid accompanied by hundreds of soldiers entered Anatolia College and began searching for guns and ammunition. The building was left severely desecrated and not a single gun or bullet was found. The only thing found was a map in the president's office of the historic region of Pontus during ancient and classical times (500 and 200 B.C). All Greek books from the Pontus Club were subsequently confiscated on the grounds that the literary Pontus Club was a 'revolutionary club'.

Early on the morning of February 13, 1921, Simeon Ananiades and three other members of the Pontus Club Executive Committee along with Professor Theocharides, were summonsed into the room of College president Dr George E. White and were arrested by Kemalist gendarmes. They were then sent to Amasya to face trial at the infamous Courts of Independence which often meant a certain death sentence without the prospect of a fair trial. Ananiades along with hundreds of other Greeks and Armenians were tortured for months before being hanged. According to eyewitness Mr P. Ebeoghlou of Amasya, before Ananiades was hanged, he managed to shout out six words. "I am innocent. Ask Dr. White!"

The story of Simeon Ananiades and the Pontus Club are told in the publication titled 23 Years in Asia Minor.
The Samsun Deportations
Turkish Atrocities in the Black Sea Terriroties
Black Book: The Tragedy of Pontus