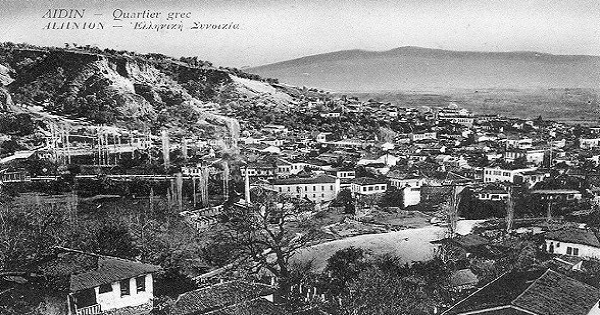 The Greek precinct of Aydin depicted on a postcard of that era.

The massacre of Greeks at Aydin (Gr: Αϊδίνιο) took place in June 1919. According to one French source, some 1,500-2,000 Greeks were massacred.1 Aydin which was known historically as Seleucia, Tralleis and Güzelhisar was located in the valley of the Meander River, 110km south-east of İzmir and comprised 35,000 residents, 8.000 of whom were Greek. In April 1919, six months after the end of hostilities in WW1, Greece was issued a mandate at the Paris Peace Conference to occupy western Asia Minor in order to prevent further atrocities against the Ottoman Empire’s remaining minorities. Hellenic forces occupied Smyrna in May 1919. Two months prior, Greek delegates seized documents that indicated that Turkish forces were planning a wholesale massacre of Greeks in the Aydin province.2 By the end of May, Hellenic forces had arrived in the region. These forces came under fierce attack by çetes (irregulars) resulting in a retreat. Following the retreat, Turkish forces tortured, raped and executed citizens and set fire to houses and churches in a massacre that lasted three days.

When Hellenic forces re-entered Aydin, they discovered the bodies of hacked and bullet ridden Greeks lying on roads and in burnt houses. In the church of Saint George, hundreds of bodies of women and children were found burnt alive, some after having been raped. At Umurlu, all the Greeks were massacred and their bodies were thrown into three huge wells. Some escaped the massacre by hiding in Armenian churches and a French monastery. Thousands took to the mountains and hid in the dense forest thinking they would be spared but the çetes found them and massacred them. In the Metropolitan church, the priests were killed and incinerated before the altar.3 Reports were also received describing the massacre of Jews at Değirmencik [Germencik] close to Aydin.4

A Greek boy scout troop at Aydin. Thirty-one members of a Greek scouting troop including their leaders were massacred at Aydin in June 1919. Source: Boy Scouts Body of Greece

Greek boy scout groups began forming in Asia Minor at the conclusion of the First World War and three groups were formed at Aydin. At İzmir, 17 Boy Scout groups existed while another 46 formed in other parts of Asia Minor. They took part in religious, athletic and philanthropic activities. During the massacre at Aydin, the regional leader of the Greek boy scouts, Nikos Avgeridis along with his boy scouts and their leaders were captured and imprisoned in the town hall. They were directed to the shores of a river where one of the çetes, Adnan Menderes asked Avgeridis to renounce his faith and ethnicity. Avgeridis declined and uttered the words Long live Hellas. Menderes removed one of his eyes with a sword. He was asked again and Avgeridis replied in the same manner. He was subsequently skinned alive and his body was dumped in the Evdona River. The boy scouts also refused to renounce their faith and ethnicity and instead replied by singing the Greek national anthem. As a result, they were blindfolded, tortured and massacred. In total, 31 of the scouting group, including the scouts and their leaders were massacred. 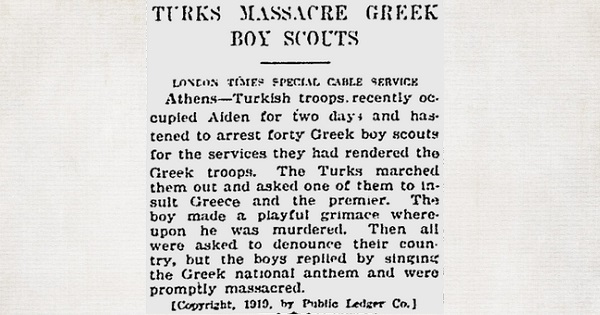 Similar massacres of boy scouts in Asia Minor occurred in April 1922 at Söke where 13 boy scouts were massacred and in August 1922 at Çiftlik (Gr: Kato Panagia) where 800 people were massacred, among them Greek boy scouts. The massacre of boy scouts in Asia Minor brought indignation and protests by scouting organizations all over the world and was reported in the mainstream media. In 1922, Sir Robert Baden-Powell the founder of the Scout movement requested that the Council of the League of Nations be informed of the massacre of Boy Scouts that was occurring in Asia Minor.5