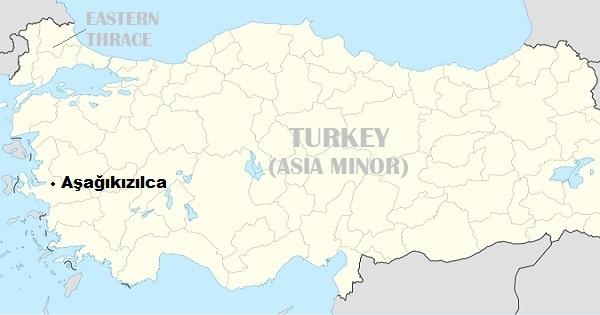 Kritzalia (today Aşağıkızılca) is located 32km E/SE of Smyrna (today İzmir) in western Turkey. Prior to the genocide 1,350 Greeks resided there.

We left our village to go to Smyrna. We thought we would return again. We wanted to be close to the church of Saint John. There were alot of people there. One of my father's friends took us to his house and we stayed there. But he took his family and left us there without telling us anything, he left secretly.  The Turks entered and slayed my father, my mother, my uncle, my auntie and three of my brothers. I, along with my younger sisters, one of whom was two and a half years old and the other three and a half, hid under a loft and they didn't see us.

We hid there for 12 days with no food or water. The house had a type of water heater and water flowed into it. What was I to do? I wanted to wet my lips. I held my nose and took a sip. The water was so filthy I almost vomited. One of my sisters had been wounded by a bullet to her leg.

As the days passed, the corpses started bruising, hardening up and the stench had become repulsive. Turkish ladies were entering the house to steal things but were unable to stay inside for too long due to the foul smell. They would steal whatever they could; chickens, spoons, copper utensils, and would then leave without knowing we were present.

Then at one point, like an enlightenment from God, I decided to venture outside. I saw many people fleeing. I crossed myself, placed my injured young sister on my back, and held my other sister by the hand and went out onto the street. I ran to catch up with everyone else who was running.  At one stage I noticed a girl seated on a pile of rocks. I shouted out to her, as I needed someone to help me. She didn't respond. She sat there without moving. I spoke to her without taking too much notice. I then saw that her eyes were rolled back, but it still didn't occur to me what had happened. Before long, I noticed something was wrong. She had been stabbed from behind with a stick which had passed through her mouth. That was when I decided to run faster. What was I to do with the two children? I entered the church, but since the three of us stunk of decaying human blood -  our hair, the child's foot, our clothes -  they told us to leave. What were we to do? We huddled into a corner like puppies. So many years have passed, but I won't forget it. I thought our time had come.

We cried, we mourned, we talked and we talked some more! My mother didn't die immediately like the others did. They had pulled out her intestines, her blood spilled out everywhere as she uttered the following to me: "My child, when you see the dark, fall into the sea." She then pulled her purse from out of her pocket and gave it to me, as well as a photograph which was covered in blood. I still have the photo but I cannot show it to you right now.

Finally, wherever the other people went, I followed. We kept going and going until we entered the [departure] zone. There, the Turk didn't allow us to enter. Just what I needed! But I managed to get both my sisters and myself on board and we went to Mytilene. There, they took us and relocated us to Thessaloniki, and from there I ended up here. I had a cousin who was a good seamstress. She put me into a home. I was fourteen years old. The lady of the house knew Ms. Koundourioti who placed my little sisters into the Amalieio Orphanage. One of my sisters died at the age of 22. The other is still alive. She is married and lives in Nea Erythraia. I married a very quiet man, a man of God, a patriot, but my life has been full of suffering.

Exodus, Volume I, Testimonies of the provinces of the Western coast of Asia Minor, Centre of Asia Minor Studies, Athens 198, pp. 42-43.