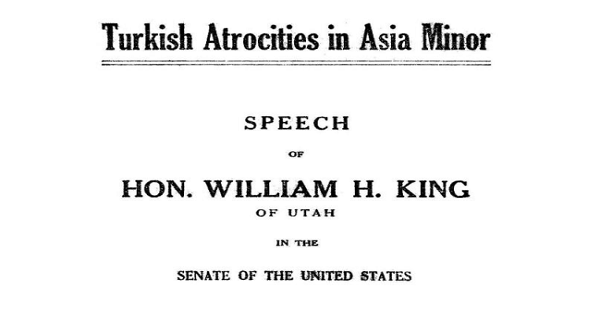 TURKISH ATROCITIES IN ASIA MINOR
SPEECH OF WILLIAM H. KING OF UTAH IN THE SENATE OF THE UNITED STATES.

A speech delivered by the Hon. William H. King of Utah in the Senate of the United States in which he highlights the atrocities committed by Kemalist forces against native Greeks in Turkey. The Senator called for the appointment of an international committee to examine the atrocities and also suggested that the nations of the world unite against these barbarities. Neither eventuated and the Kemalists were able to continue exterminating Christian communities.

Mr. President, the evidence is overwhelming, and to my mind conclusive, that the statements contained in the resolutions do not overdraw the picture. Indeed, the situation is far more tragic than that depicted in the resolutions. Unless some steps shall be taken by forces outside of Turkey to restrain the bloody hands of Mustapha Kemal, there would seem to be no hope of salvation for these unfortunate people, whose only offense is that they are Christians and have sought to give Turkey a civilization and a culture that would lift the Ottoman Turks to a higher plane, where they might fit to association with the civilized and progressive nations of the world.         -William H. King  p.6.