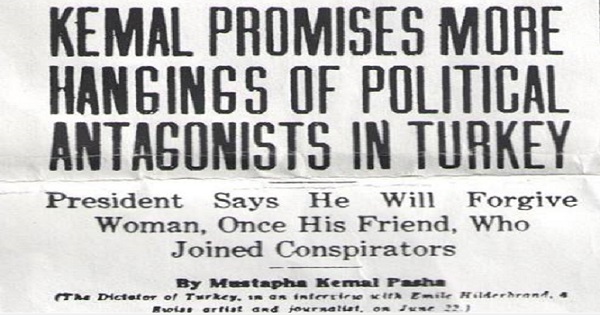 KEMAL PROMISES MORE HANGINGS
OF POLITICAL ANTAGONISTS IN TURKEY
President Says He Will Forgive Woman,
Once His Friend, Who Joined Conspirators

By Mustapha Kemal Pasha
(The Dictator of turkey in an interview with Emile Hildebrand,
a Los Angeles Examiner

I shall not stop until every guilty person, no matter how high
his rank, has been hung from the gallows as a grim warning to
all incipient plotters against the security of the Turkish
Republic. Since the very hour of its reincarnation in the
rejuvenated body of the Republic, our nation has endured
travails no other nation has ever experienced.
When we were fighting external enemies, or enemies whom
we were certain were sympathetic with foreign intriguers, nearly
all of the rank and file of our population were enthusiastically,
even fanatically, united to deliver the nation from the
multiple foreign yokes. But no sooner had the nation proved
its worth to its foreign detractors than certain elements,
bred in the old school of political intrigue, began to show
their claws. We were face to face with a menace to the life
of the republic from two elements.
One was the group who combined religious fanaticism
and ignorance with political imbecility and who, in the
past, under different Sultans had come to believe that the
state was an organism to be exploited through debauchery,
corruption and brazen bribery for personal ends. I put the
ax in the dual root of this sinister and reprehensible
theory of government by destroying the Khalif and the
Sultan. I sent into exile the persons in whom this theory
was personified. Large numbers, adherents of this school
of politics, attempted to interpret my act as atheistic,
and, under the aegis of religion, began to intrigue against
the life of the republic.

SIXTY LEADERS HANG AT DAWN
In several instances in the past when, in Kurdistan and
other interior regions of Anatolia, they showed a disposition
to challenge the will of the republic. I crushed them with
an iron hand, and for example, had over sixty of their leaders
hanged at dawn.
That element had its lesson and will not again attempt to
measure swords with me.
The second element, I am now about to deal with ruthlessly,
is the group of men who in the pre-republic days were known
to the world as the Committee of the Union of the Young Turks.
The ranks of this element were recruited from a questionable
assortment of political adventurers, half-educated
progressives and men of dissolute habits. In the days
when we were battling against foes from within and without
this element joined us and fought in our ranks. Yet from the
early days I had misgivings as to their motives. But I wished,
hoped and then prayed that once our country was redeemed
from the foreign yoke, this element would mend its methods
and become infused with the zeal of patriotism. I soon began
to realize that my hopes were doomed to be disillusioned and
my prayers were to be unanswered. I patiently waited, keep-
ing a sharp eye on their movements.

SEDITIOUS MOVEMENTS CLOAKED
They formed themselves into a political opposition. I do
not pretend to be a dictator, bent to suppress sincere and
honest political opposition, because a republic is a misnomer
when it ceases to brook criticism. But when a group of dissolute,
corrupt and unscrupulous political adventurers begin to organize
seditious movements under the cloak of political opposition,
it becomes the sacred duty of those who are in charge of the
machinery of the government to suppress it and suppress it
with an exemplary ruthlessness that will prevent the eventual
shedding of rivers of blood.
I am about to show these plotters that the Republic of
Turkey cannot be overthrown by murderers or through their
murderous designs...
These left-overs from the former Young Turkey Party,
who should have been made to account for the lives of millions
of our Christian subjects who were ruthlessly driven en masse,
from their homes and massacred, have been restive under the
Republican rule. They have hitherto lived on plunder, robbery
and bribery and become inimical to any idea or suggestion to en-
list in useful labor and earn their living by the honest sweat
of their brow.
Under the cloak of the opposition party, this element, who
forced our country into the Great War against the will of the
people, who caused the shedding of rivers of blood of the
Turkish youth to satisfy the criminal ambition of Enver Pasha,
has, in a cowardly fashion, intrigued against my life, as well
as the lives of the members of my cabinet.
I would have more respect for them had they planned an
armed revolution, taking the field in a manly fashion, to
overthrow my government. But being conscious of the fact
that they could not muster out even one regiment to give
battle to the zealous adherents to, and upholders of, the
glorious republic, they have resorted to beastial methods of
assassination. They have hired murderers and even debauched
women to commit their murderous acts.
In the middle of June last I had planned to make a tour of
the country. My itinerary was published. A group of these
assassins, placed on the route of procession, were to "rain"
hand grenades at the automobiles which were to carry me and
my staff.
They went even further and seduced a woman who had been
for years identified with my cause and who had been my loyal
political friend and on occasion, even adviser. They induced
this woman to accept the reprehensible assignment to present
me with a bouquet which concealed a bomb that would, on my
receiving it, explode and obliterate everyone in sight. This
ill_advised woman deserves pity, for she was made to believe
that she would thus sacrifice her own life for the good of the
fatherland. I was the enemy of the nation. She will be forgiven
for her part in the plot, for she conscience_stricken,
confessed to the proper authorities in time for me to cancel
my intended tour.