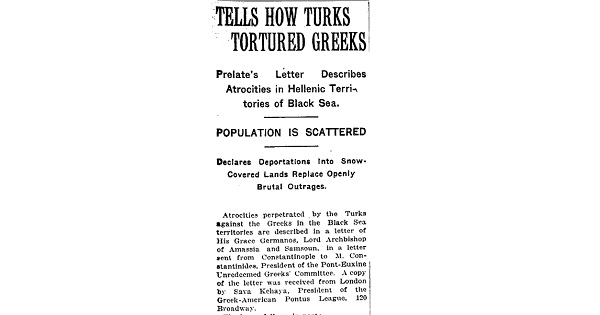 
Atrocities   perpetrated  by  the  Turks
against  the  Greeks  in  the  Black   Sea
territories   are  described  in  a letter of
His  Grace Germanos,  Lord  Archbishop
of  Amassia  and   Samsoun, in  a  letter
sent   from  Constantinople   to   M.Con-
stantinides, President of the Pont-Euxine
Unredeemed Greeks Committee. A copy
of the letter was received from  London
by   Sava  Kehaya,   President   of   the
Greek-American   Pontus  League,  120
Broadway.
The letter follows in part:
"Euxinus  Pontus  has  undergone    the
greatest calamities  and  disasters,  not
only   from   the   all-powerful   Turkish
party of  'Union and  Progress', but also
from all  the  Turkish  people. The Turk-
ish people, after having hacked to death
a million Armenians,  organised and are
still organising  according  to  the  same
methods,  similar  outrages.  They were
led, but only according to their  own in-
stincts,  by the  Government  of Talaat,
Enver,  Djemal, and their accomplices."