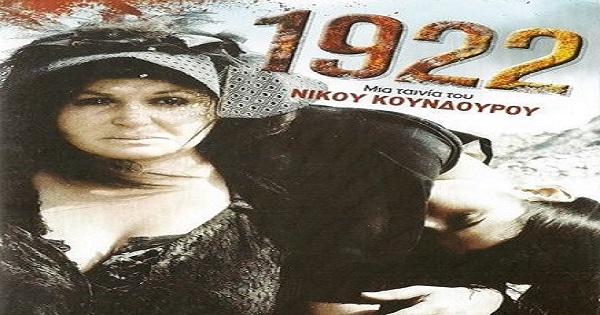 Directed by Nikos Koundouros (1926-2017), the film 1922 is a portrayal of events during the final phase of the Greek Genocide and in particular the events surrounding the Smyrna fire in September 1922. When it was due to be released in 1978, the film was banned from cinemas in Greece by the Greek Government of Konstantinos Karamanlis due to pressure by the Turkish Foreign Ministry who complained that the film would ruin Greek-Turkish relations. Despite the ban, Koundouros took a copy of the film and presented it to the Thessaloniki Film Festival in Greece where it received numerous awards. The Greek ban remained until 1982. In that year, under the government of Andreas Papandreou, the film was due to be screened at the Budapest Film Festival, but half an hour prior to its screening, it was cancelled by the Hungarian Foreign Ministry with the support of the Greek Ambassador.

1922 is an adaptation of Elias Venezis's memoir titled 'The Number 31328: The Book of Slavery' which details the experience of Venezis, who at the age of 18, was arrested by the Kemalists, taken prisoner and enslaved in a labor battalion following the Smyrna Holocaust. The prisoners were marched into the interior, but few arrived at the destination since most of them were either killed on the way or died of their hardships. Of the 3,000 conscripted into his labor brigade only 23 survived. The Koundouros adaptation however, was slightly altered and revolves around three characters; a female teacher who is sent on a death march to the interior of Turkey, the wife of a Greek merchant who loses her mind during a death march, and a young boy who manages to flee.