A General Overview of the Greek Genocide

The Greek Genocide (or Ottoman Greek Genocide) refers to the systematic extermination of the native Greek (Rûm) subjects of the Ottoman Empire before, during and after World War I (1914-1923). It was instigated by two successive governments of the Ottoman Empire; the İttihad ve Terakki Cemiyeti (Committee of Union and Progress  or CUP) also known as the Young Turks and the Turkish Nationalist movement under the command of Mustafa Kemal Atatürk. It included massacres, forced deportations and death marches, summary expulsions, boycotts, rape, forced conversion to Islam, conscription into labor battalions, arbitrary executions and destruction of Christian Orthodox cultural, historical and religious monuments. It is likely that the victim toll of the Greek Genocide was somewhere in the vicinity of 1 - 1.5 million.

The first phase of the Greek Genocide commenced in 1914 in Eastern Thrace where entire Greek communities were forcibly and often violently expelled from the country or deported to the interior of Asia Minor. Other measures used to persecute Greeks in this region were the boycotting of Greek businesses, killings, heavy taxation, seizure of property and prevention from working on their lands. In the Spring and Summer of 1914, the ethnic cleansing of Greeks along the western shoreline of Asia Minor was carried out. These operations, including those in Eastern Thrace, were planned and executed by the CUP using regular and irregular forces including members of the CUP's paramilitary unit, the Special Organization (Teşkilât-ı Mahsusa).

Following the outbreak of the First World War, Ottoman Greek males aged between 21-45 were forcibly conscripted into labor battalions (Amele Taburları) where the majority of them perished under appalling conditions while forced to do hard labor with little food or water. Then, beginning in 1915, under the direction of German military personnel, the CUP deported many Greek communities under the pretext of military necessity. Deportees were not permitted to take anything with them and the goods in their shops were often later sold by Ottoman authorities. They were deported to the interior and to Muslim villages where they were often forced to choose between Islam or death. In most cases - before deportations took place - Ottoman gendarmes (police) and çetes (armed irregulars) seized money and valuables from Greek communities, committed massacres and burnt churches and schools. According to figures compiled by the Ecumenical Patriarchate, by 1918, 774,235 Greeks had been deported from their homes, many of them to the interior of Turkey, never to be seen again. Meanwhile, Greeks living in other parts of the Empire such as the Levant, were also targeted. Between 1915-1918, a large portion of the Christian communities living on Mount Lebanon were starved to death. The famine was caused by a food blockade orchestrated by Djemal Pasha. 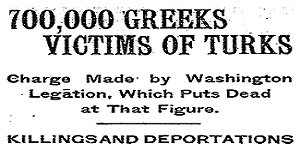 Following the Ottoman Empire's defeat in the First World War, prominent leaders of the CUP were issued death sentences in Ottoman Courts-Martial for their role in deportations and for atrocities committed on Greek communities during the war. But the post-war formation of the Turkish Nationalist movement under the command of Mustafa Kemal Atatürk interrupted proceedings to bring the perpetrators to justice. The period 1919-1922, often referred to as the Kemalist Phase, saw a continuation of the CUP policy of extermination. In the region of Pontus, the Kemalists burned countless Greek villages and sent men, women and children to the interior where large numbers perished. In many instances, Greek churches were burnt while Greeks were locked inside. In the region of İzmit alone, Kemalist forces burned over 30 Greek villages and massacred over 12,000 Greeks while in September 1922, at the completion of post-WW1 hostilities between the Hellenic Repubic and the Ottoman Empire, the Kemalist Nationalists marked their triumph by burning the city of Smyrna (today Izmir) to the ground and committing a large scale massacre of the city's Greek and Armenian population.