I was sent to Athens 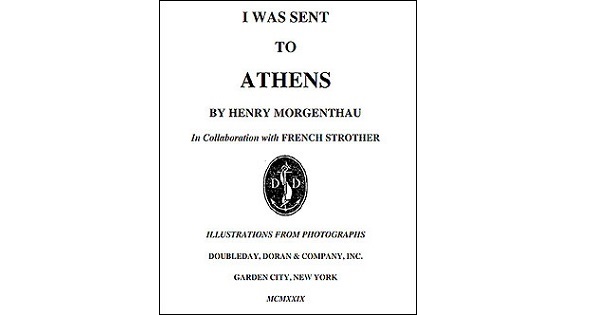 I WAS SENT TO ATHENS
HENRY MORGENTHAU SNR.
Doubleday, Doran and Co. 1929.


An account of Mr. Morgenthau's work as chairman of the Greek Refugee settlement commission, established by the League of Nations. Morgenthau was also American Ambassador to the Ottoman Empire during the First World War.

The Greek inhabitants of Turkey were, of course, citizens of the empire, and, as such, were liable to military duty. Not unnaturally, they were regarded by the Turks as unreliable soldiers in the Turkish Army. Consequently, they were not permitted to bear arms. Those who had the means to do so were coerced into buying exemption from military service at the rate of about forty English pounds per capita. The less affluent Greeks—who, of course, comprised the great majority—being unable to purchase exemption, were enrolled in so-called "labor battalions" and were put to work at menial tasks under the direction of Turkish officers. They built military roads, erected barracks, and performed other tasks of manual labor behind the lines. They were subjected to iron discipline, as the Turks regarded every Greek as a potential traitor, insurrectionist, and spy.

I would be the last person to condone the Turkish brutality toward the Greek labor battalions—for the Turks, undoubtedly with deliberate intention, so overworked and underfed these men as to cause the death of several hundred thousand of them. -Sir Henry Morgenthau,  p19