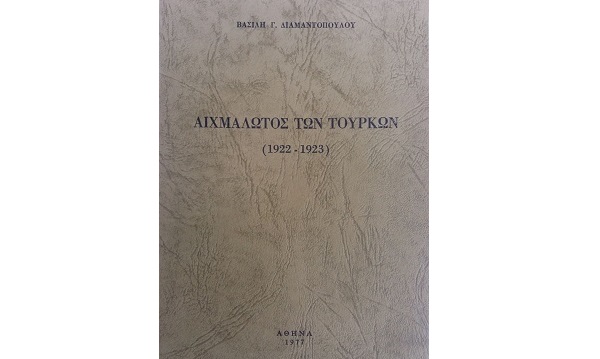 In July 1921, Vasilis Diamantopoulos was sitting his 3rd year Law exams at the University of Athens when he was called to the colors and sent to Asia Minor. He arrived there that same month and served in the 18th infantry division of the Hellenic army. In September 1922 he was captured and became one of the many thousands of Greek prisoners of war in Turkey.

In the seven months he was captive, aside from being forced to do hard labor, he witnessed executions of prisoners and was subjected to beatings and humiliation by his captors and the Turkish public. In that seven months, he was only allowed to bathe three times. The majority of the men in his battalion died of exhaustion, dysentery and exposure to cold. He arrived in Greece 7 months later, a skeleton of a man.

In 1932, a Commission of Inquiry investigated the treatment of Greek prisoners in Turkey during the genocide and concluded that their treatment was a flagrant violation of the laws of war and some acts were in contravention of the Geneva Convention. It's believed that over 100,000 Greeks were taken as prisoners of war, the majority of them perished.

Around the start of October [1922], they brought to our yard [at Nymphaion, today KemalPasa 28km East of Izmir] a convoy of about 1,300 Asia Minor Greeks, which, as we were told, was made up of citizens of Smyrna and other cities. We learned from them that Smyrna had been totally burned to the ground by the Turks. Two days later, they sent them eastwards on another march. Then two days later, they brought them back. But only half of them returned. They told us that they were marched to Philadelphia [today Alasehir, 130km East of Izmir] and then brought back, and that during the march, half of them were killed. It was of the general view that the march was designed for the sole purpose of killing them. Those who returned were then sent to Ahmetli, which is located between Kasamba [today Turgutlu] and Philadelphia.

Further reading:
The Treatment of the Greek Prisoners in Turkey
The Number 31328: The Book of Slavery
17 Jul 1923: Thousands of Greeks Disappear, Advocate
Did the Kemalists sell the bodies of Greeks and Armenians for industrial use?
Prisoners of Kemal