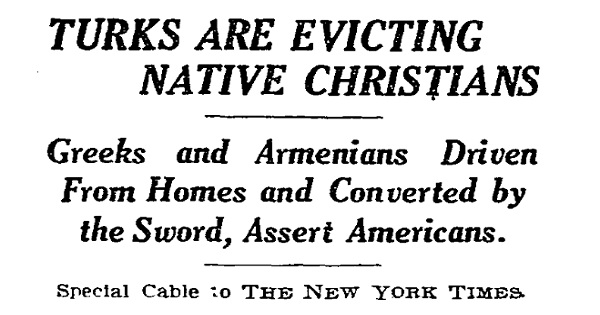 TURKS ARE EVICTING NATIVE CHRISTIANS
Greeks and Armenians Driven
From Homes and Converted by
the Sword, Assert Americans.

ATHENS, July 11,  (Dispatch  to  The
London Morning Post.) - American  trav-
elers coming  from  Turkey  have  given
such eyewitness  accounts  of  the treat-
ment   of  the  Christian  population  as
fully  bear out the reports received here
from  native  sources  to  the effect that
the Christians  in  the  Ottoman  Empire
have never  been  in  such  stress   and
peril  since the   Turk first invaded   the
Byzantine Empire.
Both  Armenians and Greeks, the two
native   Christian   races  of Turkey, are
being systematically uprooted from their
homes en masse and driven  forth sum-
marily to distant provinces, where they
are scattered in   small groups   among
Turkish villages   and   given the choice
between immediate acceptance of Islam
or death by the sword or starvation.
Their homes and property meanwhile
are being immediately taken possession
of by their Turkish neighbours or by im-
migrants from Macedonia.
Throughout the vilayets of Erzerum,
Van,  Bitlis,  Diarbekir,  Harput,  Sivas,
and Adana the Armenians have been
pitilessly evicted by tens of thousands
and dirven off to die in the desert near
Konia or to Upper Mesopotamia or the
Iberian dessert. These fiigures do not in-
clude  thousands   massacred  by   the
Kurds or  hanged  without trial  by the
Turkish authorities all over Armenia.
The Greeks are  faring  little   better,
except that  they are not being massa-
cred.  Apart   from  the  hundred  and
eighty thousand who  last  year  were
driven out of  their homes  in   Thrace
and the vilayet of Smyrna, a still great-
er number,   since Turkey  became  in-sm
volved in the war, have  been and are
still being dragged  from their  villages
throughout Thrace and Asia Minor and
deported to   purely  Turkish   districts
without   being  allowed  to take  with
them more than clothes on their backs.
Fifty-six   thousands  thus   have been
evicted from the Gallipoli Peninsula and
both shores of the Dardanelles,  fifteen
thousand from Pinkipo Islands,   forty-
two  thousand from Thrace up  to  the
suburbs  of   Constantinople,   nineteen
thousand   from   Ismid  Province, sixty
thousand from the vilayet of Bremussa [Brusa]
and this wholesale uprooting of the na-
tive population is increasing in  extent
and ferocity.
Able-bodied men are being drafted into
the  Turkish  Army  and the rest broken
up  into   little groups  and   distributed
among  Turkish  villages  of   Asia Minor,
care   being taken to break  up  families
and separate women and girls from their
friends and relatives.   Children  are   be-
ing kidnapped by  the  wholesale  along
the route of those wretched exiles, to be
brought up  as  Moslems, and  girls  are
given in so-called marriages  to  Turkish
peasants.
The remaining adults have to choose
between  death  and  apostasy.
It is safe to say that   unless   Turkey
is beaten  to   its knees   very   speedily
there will  soon be no   more  Christians
in the Ottoman Empire.

Further Reading:
The Ethnic Cleansing of Greeks from Gallipoli, April 1915
16 Jul 1915: Turks Persecute Greeks, The Age
Deutschland über Allah! Germany, Gallipoli and The Great War.
The Testimony of Metropolitan of Gallipoli and Madytos, Konstantinos Koidakis
Evacuation of the Different Towns and Villages and Violent Manner of Expelling the Inhabitants, 1915