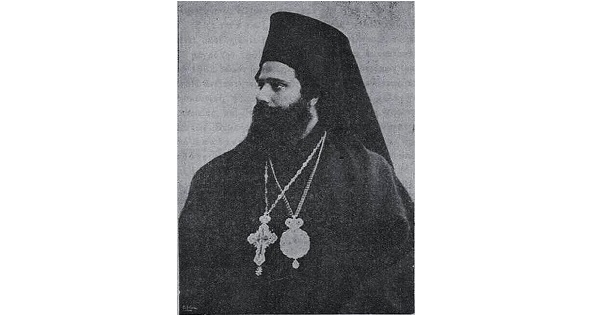 Konstantinos Koidakis (1876-1954) was originally from Çeşme (Gr: Krini) in Asia Minor. He studied at the Evangelical School of Smyrna and then at the Theological School of Halki before being ordained as the Metropolitan of Gallipoli (today Gelibolu) and Madytos. He witnessed the persecution of the native Greeks on the Gallipoli peninsular during the First World War and on the 1st of July 1915 he wrote:

More compassion is shown here to dogs than to the Christian refugees. A Greek doctor of Panderma [Bandirma], mistaken for a Moslem, overheard the following conversation between two Turks: One of them indulgently qualified the Greeks as 'refugees,' thereupon the other emphatically replied, 'They are not refugees, but dogs.' To their eyes, the Greeks were not worthy of the name of men. The same doctor called to attend to sick refugees had to protest to the Police in the name of humanity, who prevented the refugees from even getting a drink of water from the adjacent fountain.

Close to the Panderma [Bandirma] Railway Station the deaths of the refugees occur daily, and according to my information many die in the interior of the country. The refugees who arrive at Panderma Station, exhausted through hunger and thirst, are often abandoned two or three nights without shelter, and when the trains which are to transport them to the interior are ready, they are kicked into the wagons in asphyxiating numbers. A child only six months old was crushed in the arms of its mother. Holding the dead child, the unfortunate mother tried to bring it back to life, while uttering the most terrible laments. The spectacle was heartrending. When the train started, the poor woman, in a terrible anguish, was obliged to part with her baby by throwing it out of the door.

Some of the refugees, driven to despair, bewailed their lot in the presence of an officer, crying: 'For God's sake put us to death rather than torture us in the way you do.' The officer, in a tone of ferocious irony, replied: 'To massacre you would be doing you a good turn, because you will suffer once only, whilst it is necessary that every one of you should die a little every day, so that you may feel for a long time the dread of death.'

A Christian left alone at Marmara, owing to the illness of his wife and his old father's infirmity, had to carry her corpse on his shoulder to a distance from the village, and with his own hands dig a grave and bury his wife.

The Christian Orthodox Greeks subjected to this new system of persecution, without massacres, and consisting of protracted privations of all kinds, are surely, slowly being done to death. There is no place any more in Turkey for Christ's flock. For what is meant by their dispersion in small groups in Turkish villages, without Churches or priests, or intercourse with their countrymen, or the comforts of their religion? What can mean the scattering of the inhabitants of Bairi [Bayırköy], among thirty-six Turkish villages from one to twelve hours distant from Balikesse [Balikesir]? The dispersion of the other Christian refugees? What is meant by the repeated deportation of the poor Greeks from one place to another ? Nothing less than through privation and fear of death and in order to escape they should consent to abjure the Christian faith.

The same Metropolitan of Gallipoli on the 17th July, 1915, wrote:

The extermination of the Christian refugees is most methodical. If they are deported for strategical reasons alone, they could have been left to settle in the place to which they were originally sent. Such, however is not the case. What is obviously aimed at by constantly shifting them from place to place is to exhaust them and so cause their death. Two hundred and fifty villagers of Krithia, along with some others of Madytos from Pasha Liman [Paşalimanı], who arrived here about a month ago are still in the fields near Oktche Gucul Station. They do not possess the necessary money to provide for their own transport, and are kept waiting indefinitely, till it pleases the Government to take charge of them and send them to their destination. Their position is indescribable.

Yesterday, at my request, four of my countrymen at Oktche Gucul came and saw me to whom I secretly gave some money to be distributed among the refugees. I was dumbfounded at their appearance, so terribly changed from human beings did they look. I crossed myself. The unfortunate creatures fell at my feet and with tears in their eyes, asked to kiss the Crucifix. 'Give us the Cross of Christ to kiss,' they said, 'it is a long time since we last did so. It is a long time since we have heard the Gospel preached.' I presented the Holy Bible to them, which they kissed fervently after making the sign of the Cross. I was astonished at such piety and gave them my benediction. Before leaving with the money destined to appease their hunger, they asked to kiss the Crucifix again.

Such was my emotion that, with tears in my eyes, I appealed to God in these terms: 'Lord have mercy on and save Your people. Send them Your blessing. Abandon them not into the hands of the tyrants, but protect them with Your Almightiness.'

At the time of the evacuation of Mihaniona and Castelli all the Christians' property was plundered. The Christian inhabitants of these villages, along with the refugees of my Diocese, were sent to the Railway Station at Panderma to be transported to the Interior.

The Turks, like beasts of prey, immediately plundered all the Christians' property and carried it off. The inhabitants and refugees of my district are entirely without shelter, awaiting to be sent no one knows where ...