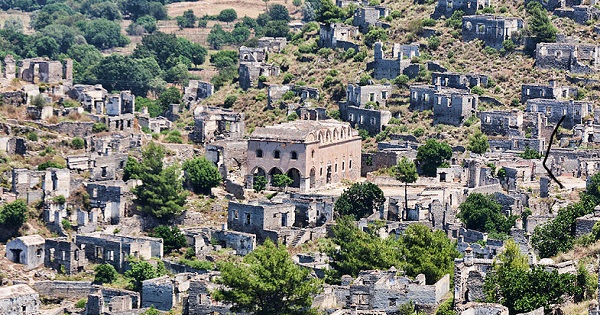 Kayaköy (Gr: Levissi or Livissi) and Fethiye (Gr: Macri) are two towns situated 8 km apart in the historic region of Lycia in south western Asia Minor (today Turkey). Levissi (also pronounced Livissi, Loivissi or Leivissi) is situated in close proximity to ancient Karmylassos while Macri is believed to be the site of ancient Telmessos.  Prior to 1922, these two towns were made up almost entirely of Greeks. Today, none remain.

Kayaköy is built on a mountain slope. The exact Greek population of Kayaköy prior to the genocide is uncertain but would have been around 3,000. In 1851, Schönborn estimated Kayaköy had a Greek population of around 2,000.1 The residents of Kayaköy were mainly tradesmen and business owners. Neighboring villages included Peltziazi, Kestepi, Kioutzeki, Yiouksekoumou and Taliani. Today Kayaköy is considered an 'abandoned' town. However it was far from abandoned. Around the period of World War I, the Greeks of Kayaköy were ethnically cleansed then forcibly expelled in 1922. Their homes have remained vacant ever since. In 1957 an earthquake damaged a large portion of the homes leaving them in their current state. Fethiye, a seaside town on the Turkish peninsular, is situated 36 nautical miles from the island of Rhodes. There were more than 70 villages and hamlets in the district of Fethiye. At the start of the 20th century, it had a population of roughly 4,560 of which 3,300 were Greeks, 1,200 were Turks and 60 Jews.2 From 1840 onward, Fethiye increased in population due to an influx of people from the Dodecanese islands. Today it is a city with a population of 68,000 people.

Ecclesiastically, both Macri and Livissi were part of the Ecumenical Patriarchate within the regional diocese of Pisidia. Within the Ottoman jurisdiction, Fethiye was a kaza and also the seat of a kaymakam (Governor). Administratively, Levissi belonged to Macri. Levissi had a Christian mukhtar (village head) who was appointed by the Ottoman authorities. During the mid 19th century, like many of the Greek towns along the Asia Minor shoreline, the Greek communities of Kayaköy and Fethiye experienced an intellectual reawakening. This was manifested by the creation of schools, libraries and newspapers and an increased use of the Greek language. Individuals such as Michail Konstantinou (1829-1896) were responsible for this reawakening. Konstantinou played a key role in building schools in the region. And like all of the Greek communities in the Ottoman Empire, hopes were raised of equality among all citizens with the Young Turk Revolution of 1908. Those hopes were soon dashed. During the years 1916-1918, 1,200 families from Fethiye were deported to the interior.3

In September 1914, Ottoman authorities began the persecution of the Greeks of Fethiye. Following a tour of the seventy villages and hamlets of Fethiye, Yusuf Zia Efendi, court judge, and Talaat Bey, head of the recruitment office, passed secret messages to the mosques of the region to drive out the Greeks. Muslims were told to take possession of the fields owned by Greeks and everything they owned and to distribute them among themselves. They were also ordered not to buy or sell things to them.4 This campaign was designed to scare the Greeks into abandoning their homes and belongings which were then usually stolen, or they were robbed as they fled. During these offensives, hundreds of Greeks were murdered by brigands and other neighboring Turks. Women were raped and their clothes and shoes were taken from them. One example of the murders in the region is that of Antony Orfanos and Basil J. Karagiorgis who were both seized in the village Mentos, three hours from Levissi by a band of peasants, who after stripping them bare, cut them into pieces and left them to be eaten by the animals.5

When mobilization for WW1 began, Greek men over the age of thirty-seven were ordered to pay the tax of exemption to avoid being mobilized. Within the space of fourteen months, men were asked to pay this exemption three or four times, and later they were enrolled in the notorious Labor Battalions (Amele tabularli). Fethiye contributed with two battalions of more than 3,000 men. After working for a year and half in the vilayet of Smyrna they were transferred in a pitiful condition, naked, and deprived of all their possessions to the steppes of Angora, Van, Erzurum and Diarbekir.6 Only a few hundred would have survived. In July of 1916 a letter written in Greek and addressed to Mr Alfred Biliotti the Consul General of Great Britain at Rhodes, was intercepted at Kayaköy. The letter contained an account of the murders and persecution of the Greeks of Kayaköy and Fethiye who begged for external intervention. But the interception of the letter by Ottoman authorities only caused an increase in rage and hatred towards the Greeks. Hundreds were dragged into dungeons, urged on by blows and insults and the notables were sent to prisons. People had to produce money and give up their valuables to avoid torture. After four months of suffering, Greeks were deported by foot to Denizli, 220 km away. At Denizli, Greeks were submitted to more acts of torture. A priest of eighty years was made to stand on one leg for entire days after which he was punished with one-hundred blows with a rod. His beard was then plucked off because he refused to make admissions which the troupes wanted him to make. After torturing him for seven consecutive days, he was thrown into a dungeon alone and in a dying condition. Two days later he was found deceased. Such were the tortures perpetrated that Denizli had become notorious as the city of torture.7

Without exception, all Greeks refused to change their faith and so were faced with enduring more torture at the hands of the authorities. John Agicritis, after being beaten, was placed in a bath of freezing water followed by the tearing away of his fingernails, the cutting off of his nose and ears and finally the blinding of his eyes. Others such as George Anagnostopoulos, the Secretary of the Town Council suffered similar tortures and was buried alive. George Contou had his eyes pricked day and night by thick pins; his eyes and entire body became so swollen that he died in terrible pain. 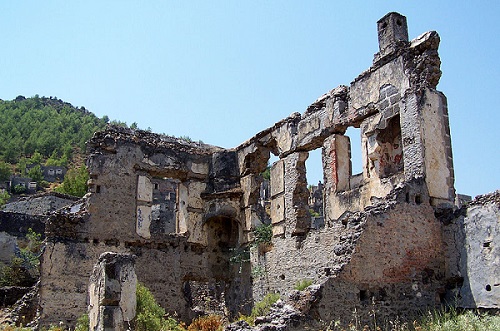 The once beautiful Levissi. Photo source.

The next series of deportations were carried out in two parts, first in November 1917 and then in April 1918. During the 1917 deportations, 400 families were deported while in 1918, 900 families were deported.9 This completed the destruction of Kayaköy and Fethiye. Deportees, which consisted mostly of women, children and the elderly - the men having been sent to the labor battalions - were given forty-eight hours notice to prepare. In the first group, the two thousand women and children were only allowed to take with them whatever they could carry and therefore sold all their belongings at ridiculously low prices at the last minute. The forced march of fifteen days saw roads being strewn with bodies of dead children and the elderly who succumbed to hunger, cold and fatigue. Mothers were seen leaving their children under stones or throwing them into ravines as guards did not permit a burial for fear of delaying the advance. Along the way women were flogged and beaten pitilessly in order to make them pay the baksheesh (tip) which they did not cease to demand from them.10 Worse atrocities were experienced in the second deportation. By April 1918, Kayaköy and Fethiye had been almost completely depopulated. Homes and businesses were left in the hands of the authorities. Some business owners sold their businesses at ridiculous prices before deportation.

Throughout this period of persecution of the Greeks of Kayaköy and Fethiye, and as is customary during genocide, women were sexually assaulted. A string of assaults rapes and orgies were perpetrated against women throughout the region by Hassan Bey the Mudir of Kayaköy, Hassan Ghazian, an Arab, commissary of the guards and Itaat Reissi Osman Bey. One example was when the daughter of Husum Costa was violated by the mudir (local governor). She was recovered by her father but died at Denizli due to her ill-treatment to which she was subjected to. Chrysanthi Hadji Anastasiou, Catina Salliaca, Mary Antaliaki and Irene Athanasiou, all of good families, were violated and insulted by those mentioned above and by Osman Bey, Chief of Police. Mary Antaliaki died as a result of an abortion at the house of Michael Louisides.11

After September 1922, the remaining Greeks of Kayaköy and Fethiye were given short notice to abandon their homes and embark on ships to Greece. The majority of them were sent to the islands of Rhodes, Castelorizo, Kea and Tinos.

Further reading:
Persecution and Extermination of the Communities of Macri and Livissi (1914-1918).
The Testimony of Grace Papageorge