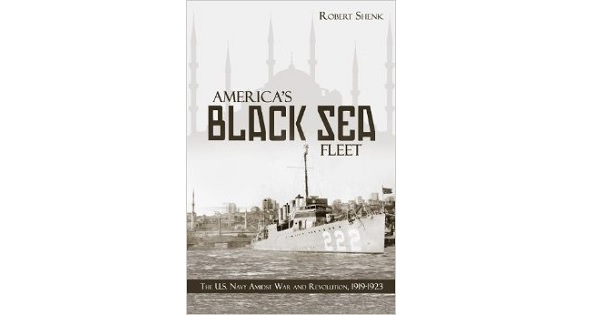 Drawing heavily on previously unknown sources, Robert Shenk offers a revealing portrait of America's small Black Sea fleet in the years following World War I. American officers and sailors reported on the terrible death marches endured by the Greeks of the Pontus region of Turkey. In September 1922 the fleet conducted the evacuation of hundreds of thousands of Greek and Armenian refugees from burning Smyrna, the cataclysmic conclusion of the Turkish Nationalist Revolution. After Smyrna, the destroyers escorted Greek steamers in their rescue of ethnic Christian civilians being expelled from all ports of Anatolian Turkey.

Quotes from the book:

...most of the 1915 and 1917 deportations in the Pontus had involved slaughter, rape, brutality, and robbery that reached far beyond any justification, military or otherwise. (from page 90)

Whatever the basic character of Mustapha Kemal himself, for instance, he was in those early days, and actually for a considerable time, at least the companion and perhaps partly the creature of many cutthroats. As just one example, Kemal's bodyguard in late 1920 and apparently extending as far as early 1923 would be provided by Osman Agha, or 'Lame Osman', notorious leader of irregulars who, according to Kemal's recent Turkish biographer, was a 'sadistic ethnic cleanser of Armenians and Greeks', a description that documents in the Bristol papers amply confirm. (from pages 50-51).

By the same author:
The Greek Genocide in American Naval War Diaries